Oregon Conservation Strategy ecoregions provide information on each of Oregon’s nine ecoregions, which are portions of the state with similar climate and vegetation. Information is provided on the characteristics, conservation issues and priorities, limiting factors, recommended approaches, Strategy Species, and Strategy Habitats for each ecoregion. Press the map (thumbtack) icon at the top right corner of this page to see a map of the ecoregions, or visit the Oregon Department of Fish and Wildlife (ODFW) Compass mapping application.

For the inland portion of the state, the Strategy uses the Environmental Protection Agency’s (EPA) Level III Ecoregions, but combines the Snake River Plain with the Northern Basin and Range. The Strategy designates the Nearshore ecoregion from the outer boundary of Oregon’s Territorial Sea at 3 nautical miles to the supratidal zone affected by wave spray and overwash at extreme high tides on our ocean shoreline, and up into the portions of estuaries where species depend on the saltwater that comes in from the ocean. 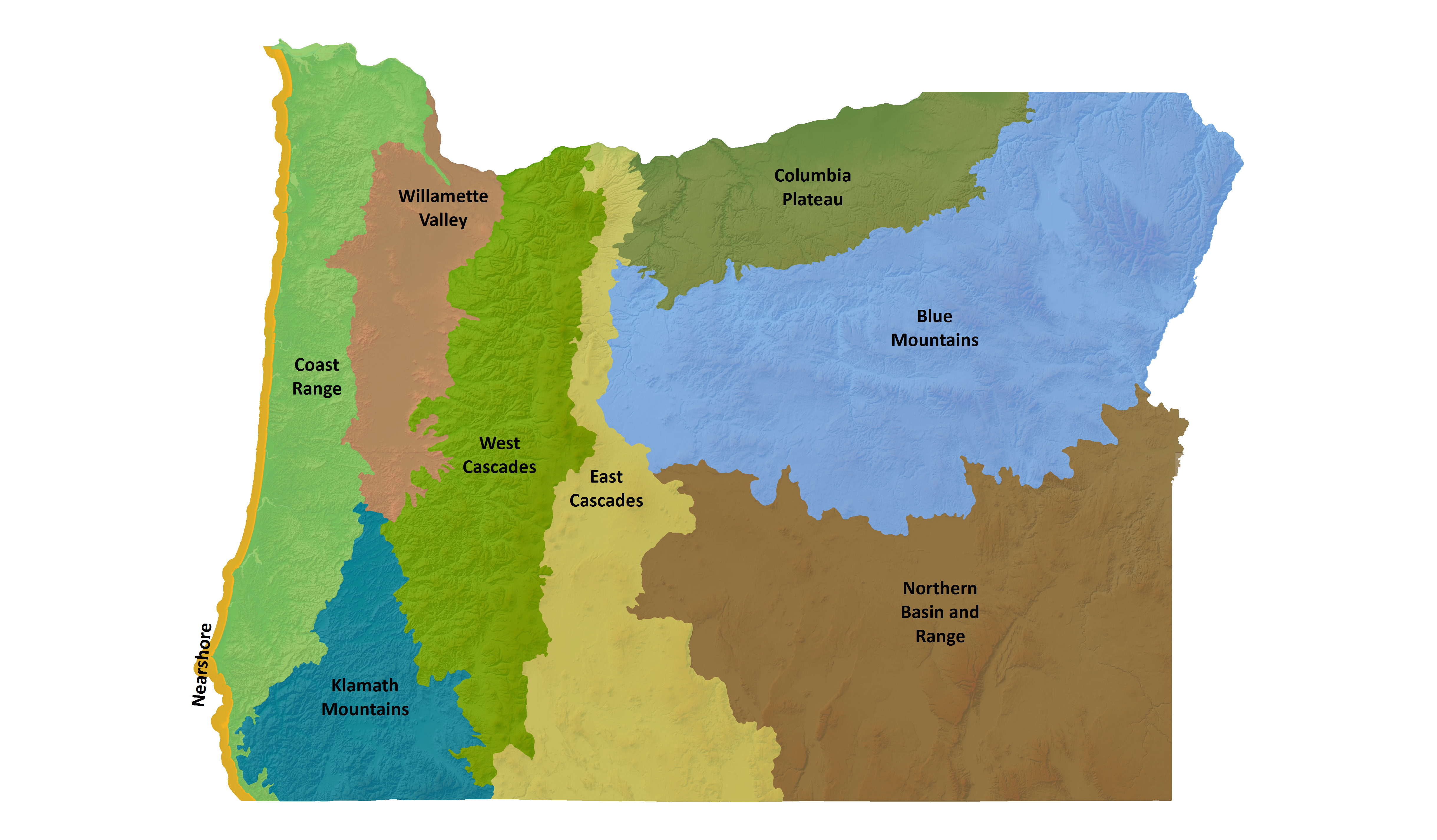 The Columbia Plateau ecoregion was shaped by cataclysmic floods and large deposits of wind-borne silt and sand earlier in its geological history. It is dominated by a rolling landscape of arid lowlands dissected by several important rivers, and extends from the eastern slopes of the Cascades Mountains, south and east from the Columbia River to the Blue Mountains.

The East Cascade ecoregion extends from the Cascade Mountains’ summit east to the warmer, drier high desert and down the length of the state. This ecoregion varies dramatically from its cool, moist border with the West Cascades ecoregion to its dry eastern border, where it meets sagebrush desert landscapes.

The Northern Basin and Range ecoregion covers the very large southeastern portion of the state, from Burns south to the Nevada border and from the Christmas Valley east to Idaho. It is largely a high elevation desert-like area dominated by sagebrush communities and habitats.

The Willamette Valley ecoregion is bounded on the west by the Coast Range and on the east by the Cascade Range. This long mostly level alluvial plain has some scattered areas of low basalt, and contrasts with productive farmland and large urban areas. It has the fastest-growing human population in the state resulting in challenges due to land-use changes.

The Nearshore ecoregion includes a variety of habitats ranging from submerged high-relief rocky reefs to broad expanses of intertidal mudflats in estuaries and hosts a vast array of fish, invertebrates, marine mammals, birds, plants, and micro-organisms. This ecoregion encompasses the area from the outer boundary of Oregon’s Territorial Sea to the supra-tidal zone, and up into the estuaries.

One river connects many of Oregon’s ecoregions. Its immense size and unique characteristics make the Columbia River a special place that requires a coordinated conservation approach.

Beginning in the Canadian Rockies of British Columbia and the Clark Fork in Montana, the Columbia River is the largest river by volume flowing into the Pacific Ocean from North America. During its long journey, it flows through 63 cities. It is the 15th longest river in North America and has the sixth largest flow.

The Columbia Basin is the 258,000-square-mile area drained by the Columbia River. The Basin extends roughly from the crest of the Cascade Mountains of Oregon and Washington east through Idaho to the Continental Divide in the Rocky Mountains of Montana and Wyoming, and from the headwaters of the Columbia River in Canada to the high desert of northern Nevada and northwestern Utah. The Columbia Basin includes two countries, Canada and the United States, including parts of Washington, Oregon, Idaho, Montana, Wyoming, Nevada, and Utah. Within Oregon, the Columbia collects water from five ecoregions, including the Coast Range, Willamette Valley, West Cascades, East Cascades, and Columbia Plateau.

The Columbia River has played a significant role in human activities for at least 12,000 years.

In addition to being home to native people, the Columbia River Gorge provided a portal through the mountains that served as a major trade route. Objects found in the gorge originate from as far away as Alaska, Minnesota, and Mexico. The salmon fishery at Celilo Falls drew people to multilingual fishing settlements. The Columbia River Gorge was one of the primary trade routes in North America. The gorge served as an important passage through the mountains for trappers, the Lewis and Clark Corps of Discovery, and Oregon Trail emigrants. It has been designated as a National Scenic Area to protect its natural and cultural features by concentrating human enterprises within established cities.

Nearly half of all hydroelectricity produced in the United States comes from the Columbia and its tributaries via 150 hydroelectric projects. The Grand Coulee Dam and the Chief Joseph Dam are the largest dams in the United States, and Grand Coulee is the third largest hydroelectric dam in the world. The dams also provide water for the Columbia Basin Irrigation Project, one of the most extensive irrigation projects in the western United States. Watering more than 500,000 acres of fertile but arid farmland, central Washington has turned the area into a major agricultural center that produces apples, potatoes, alfalfa, wheat, corn, barley, hops, beans, and sugar beets.

Recreational use on the Columbia River is increasing. Fishing, windsurfing, hiking, wildflower viewing, camping, waterfall viewing, and scenic touring are all popular activities.

Just as it provides a means for people to travel, the Columbia River is the link between habitats and landscapes for other species. It is a primary migration route for anadromous fish from the entire basin. Historically, the Columbia produced more Chinook, coho salmon, and steelhead trout than any other river in the world. Ten to 16 million adult salmon once entered the river each year. These mighty runs have been impacted by historical overfishing, habitat degradation, and passage barriers, including a series of dams.

Because of its unique geology and dramatic range in elevation, temperature, and precipitation, the Columbia Gorge has diverse plant life. The gorge’s dazzling array of approximately 800 flowering plants draws many visitors each spring and summer. It is home to several endemic plants and invertebrates. For example, 14 wildflowers occur in the gorge and nowhere else. Because of their limited range, endemic species are particularly vulnerable to habitat alteration and other changes.

Some Strategy Species, such as salmon, western painted turtles, and several invertebrates, primarily occur or move through the Columbia Gorge. For example, the river is a critical migratory path for many populations of declining salmonids, linking their habitat across hundreds of miles. These species associated with the Columbia are listed in the separate ecoregional chapters; however, their conservation requires a more holistic approach, one that looks at the Columbia as a system.

The Columbia River has been dramatically altered by development and hydropower dams. Riparian, wetland, and estuarine habitat has been converted into railroads, highways, and urban areas. Large dams have turned the free-flowing river into a series of lakes, taming its seasonal temperament. Uniform flow has further altered riparian and wetland habitats. Large and small dams throughout the system have blocked migration routes and disrupted seasonal water temperature regimes.

Because the Columbia River drains such a large area of varying land uses, it collects and concentrates pollutants from urban areas and from agricultural areas. Some of these nonpoint inputs include fertilizers and pesticides. Two particular challenges regarding point pollution sources are the Portland Harbor and the Hanford Nuclear Reservation, both Environmental Protection Agency Superfund Sites. Because of its importance to commerce, the Portland Harbor is one of the most highly industrialized systems in Oregon. For more than 100 years, many businesses, including manufacturing and ship building businesses, have operated at the harbor. Consequently, the aquatic system has been contaminated with heavy metals, polychlorinated biphenyls (PCBs), and other chemicals from industrial processes. Contaminants also have seeped into the Columbia River from the Hanford Nuclear Reservation, which once served as a plutonium production complex with nine nuclear reactors and related facilities.

Other issues affect the Columbia Gorge and River. Just as it collects and drains water over a wide area, the Columbia Gorge funnels air pollution from as far away as Eugene, Oregon, and Tacoma, Washington. Winter inversions trap pollutants, affecting air quality. Also, residential and other development is increasing. Lastly, because the Columbia River is home to large ports and is a route of transportation, invasive species are a concern.